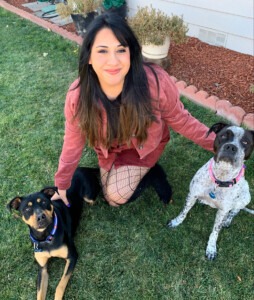 Kent Curtis, Board President, reflected upon her promotion stating, “Azarel’s drive and commitment to the organization is unparalleled. She stepped into a new role at a critical time of growth for the organization and performed admirably in two jobs. Azarel’s success is due to her passion, strength and willingness to jump in feet first. While at ASU, she served as a student trustee to the Board of Directors, as VP of student government, and VP of the Model United Nations. She is a first generation college graduate earning two Bachelor of Arts degrees in Political Science and History, and a Masters in Public Administration from the university. We are so lucky to have her to carry out the fund’s commitment to helping rural entrepreneurs thrive, especially women, in historically underrepresented communities.”

Prior to working with the First Southwest Community Fund, Azarel served as Grants Manager for the San Luis Valley Behavioral Health Group in Alamosa, and as Assistant to the City Manager for the City of Monte Vista as a Best & Brightest Intern through the Colorado Department of Local Affairs. Azarel currently serves on the San Luis Valley Community Foundation and Start Up Colorado Board of Directors, the Economic Development Council of Colorado’s Policy Committee, Philanthropy Colorado’s Equity Committee, as Vice President of the Young Professionals of Alamosa, and recently completed the Inaugural Boettcher Foundation Doers and Difference Makers Fellowship.

Cass Walker, former Executive Director, said, “I am absolutely thrilled that Azarel will be assuming the Executive Director role. Her expertise, passion and commitment to FSWCF’s mission is unmatched. Through her previous roles as Program Director and serving on FSWCF’s Board of Directors, she has helped steer and grow FSWCF to the impactful organization it is today. I truly believe Azarel is a transformational leader for the economic development space in Colorado, and our rural communities are very lucky to have her leadership.”

In reflecting upon her promotion, Azarel said, “I am thrilled to have been chosen to lead the First Southwest Community Fund as its new Executive Director. In the words of the late Selena Quintanilla: “Me siento muy excited”. I have had the opportunity to serve in this capacity as an interim and have been truly overjoyed to build relationships and advocate for the rural entrepreneurial ecosystem. I would like to express immense gratitude to my predecessor, Cass Walker, whose leadership and mentorship was key to the growth of the organization and for my professional growth, as well. I am passionate about our work and excited for our very bright future.”