Azarel Madrigal has been named the Adams State 2022 Exceptional New Alumna. She will receive her award during the Homecoming Alumni Banquet on October 7, 2022.

The following article was published on the Adams State website:

When Azarel Madrigal decided to further her education at Adams State University, the first-generation student’s parents told her, “you will have to figure it out.” Not only did Madrigal figure out the process to begin her academics she soon involved herself in the student government organization, including serving as the student trustee; participated on the cheer squad; and won a top award at an international Model United Nations event in Menton, France.

“My parents were always supportive,” Azarel Madrigal said. “They just didn’t know anything about going to college.” After earning her bachelor’s degree in history/political science, Madrigal set her sights on a master’s degree and pursuing a profession to help others “figure it out.”

After a referral from Dr. Beverlee McClure, Ph.D., a member of the First Southwest Community Fund Board, Madrigal joined the nonprofit board. “I have focused my career on creating equity in capital disparities in rural Colorado and my skill set was a good fit as a volunteer board member. I was super excited about the nonprofit and being a part of it.” When a paid position for a program director was created, Madrigal considered the idea of switching careers and filling her days working full-time with the FSW Community Fund.

She stepped down from the board, assuring the members to apply. It was a pivotal time, women in rural businesses received funding and Madrigal built and implemented the program for the San Luis Valley. “I came on board and hit the ground running.” She worked with a “phenomenal” director, Cass Walker, who became a great leader and mentor for Madrigal.

With Walker’s encouragement, Madrigal applied for the position as executive director when it became available. “To have real social justice, you have to reach economic justice. I am excited to be a part of developing change in our community.”

In addition to her role with FSW Community Fund, Azarel serves on the Community Foundation of the San Luis Valley Board. One of the key activities of this organization is awarding scholarships to female students of Hispanic decent in the SLV. “I recently presented one to a first-generation student from Center. As I read her essay, I could see some of myself in her. By presenting her award in Spanish, her parents were aware of what was happening. I am happy to help bridge the divide. My story isn’t that inspiring but if potential students relate to it – and see if ‘she can do it, why can’t I,’ it shows you don’t have to be exceptional to be a good fit for higher education.”

Although Madrigal may not believe she is exceptional, the Alumni Board members believe differently, as Madrigal will receive the Exceptional New Alumna during the annual Homecoming Alumni Banquet on October 7, in the Student Union Building.

Madrigal is quick to credit faculty and staff for providing support and the opportunities to sharpen her skills. From the start, Adams State brought Madrigal into the fold with a personal touch. “Priscilla Gardea, Class of 2006, (then admissions counselor) met me at a public library to help build my first ever class schedule. Priscilla was there for me during my entire college career.”

Professors invested themselves in her success as well. Mari Centeno, Ph.D., professor political science and Model United Nations sponsor; and Michael Mumper, Ph.D., director of the master’s program in public administration, were key to building her self-esteem and professional skills. “Dr. Centeno saw the potential in me I didn’t see in myself. I had a lot of self-doubt and Mari gave me positive feedback and encouraged me to take leadership roles across campus and network. She really helped me become a strong public speaker. The impromptu speeches she required in class really paid off.” 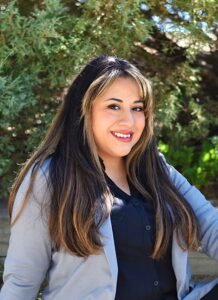 “As an English Language Learner, I would often have issues transferring the thoughts in my head to paper. The history professors provided useful feedback and did not make me feel bad about it. They all took the time to help me.”

As an Adams State Associated Students and Faculty Executive Board member, Madrigal worked collaboratively and networked with departments and community and served as the student trustee for the Adams State Board of Trustees.  “I was directly involved in policy change at the state legislative level.”

She served as vice president of the Adams State Model UN organization and at the Annual International Conference Sciences Po Paris – Campus de Menton in Menton, France, won the outstanding delegate award. “I came from Adams State and competed against big universities like Duke and Brown and because of the amazing coaching from Dr. Mari Centeno and the skills I learned from her, I beat out these big-name, large universities.

“Adams State will always have a place in my heart. I was there for seven years, (earning an undergraduate and graduate degree) and I am honored and humbled to receive this award

Bilingual: fluent in Spanish and English